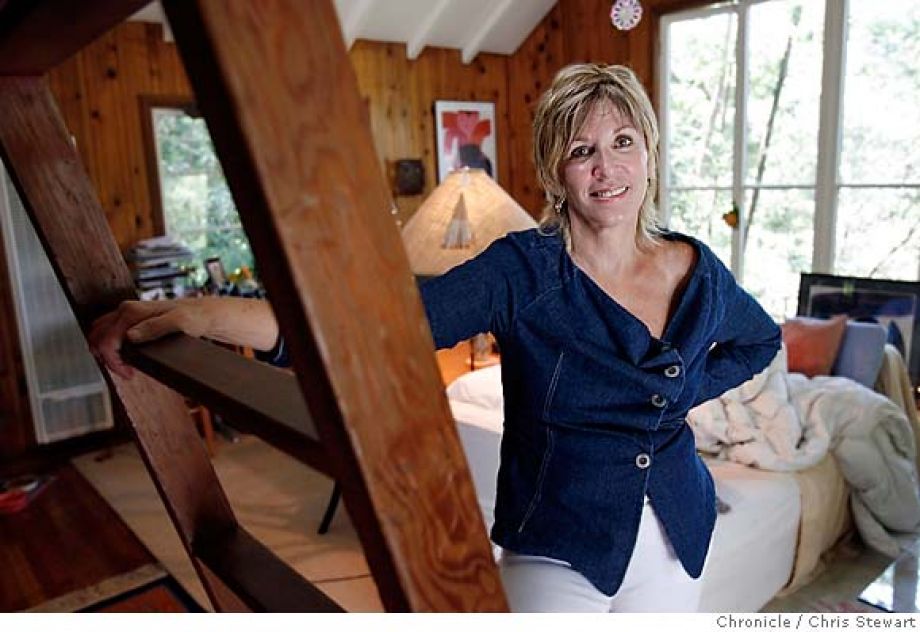 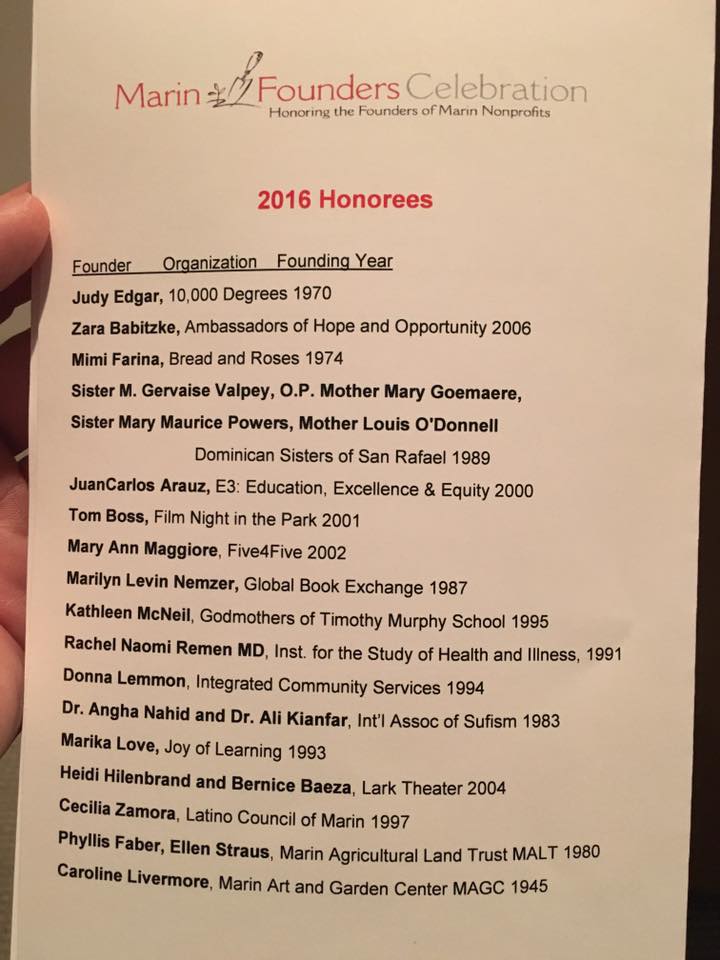 The Marin Founders Celebration was established in 2015 and is an annual celebration honoring Marin County’s nonprofit leader’s considerable contributions to the community.

Marin Nonprofit Founders have tilled the ground, planted the seed and grown the sustenance for a community that works together to care for each other. Founders provide services for people in health care and other social services, education, art, science, environmental awareness and much more. Founders notice, empathize, envision, inspire, organize, manage, teach, lead and persist. Communities benefit from founder’s insight, foresight and courage.

2007 Recipient of the Jefferson Award

Up from the streets herself, she’s on a mission to help youth
Shelah Moody, Chronicle Staff Writer

Sunday, July 22, 2007 – They do not panhandle and they are not on drugs. According to Zara Babitzke, there are hundreds of homeless young people on the streets of Marin County and they blend in with everyone else. Some end up living with friends, couch surfing, while some seek refuge in cars and public parks.

Babitzke, formerly homeless herself, is founder and director of Ambassadors of Hope and Opportunity, a Mill Valley nonprofit devoted to helping Marin’s homeless young adults through services, community awareness and political action. “These young people are bright, articulate, creative — they are not the perception that people have of the homeless,” said Babitzke, who established Ambassadors of Hope and Opportunity in 2005 to help stem what she calls a national crisis. According to the 2000 U.S. Census and the National Runaway Switchboard, 40 percent of the growing homeless population are age 14 to 25. Babitzke cited parental abuse, neglect and abandonment, as well as poverty and family histories of mental illness and drug and alcohol abuse, as some of the main reasons for youth homelessness.

“The transition to adulthood during the past 40 years has become more protracted and difficult for youth, who, well into their 20s, continue to depend on their parents for financial help, health insurance or a place to live between jobs,” said Lawrence Goldfarb, a founding partner of the investment bank LRG Capital and a sponsor and board member of Ambassadors of Hope. “Not all parents have the resources to offer these supports, and still others face even greater demands because their children have physical, mental or behavioral problems.”

Through AHO — which has more than 300 volunteers and funding from Marin Community Foundation, San Francisco Foundation, Wells Fargo Bank and United Way, as well as LRG Capital — Babitzke provides stable housing, guidance and community connections for homeless young adults. The organization matches them with “life coaches,” individuals who may have experienced some of the same situations and want to make a difference in someone else’s life.

“The perception is that Marin County is a wealthy community and that everyone has a lot of support and resources,” said Babitzke. “That’s really not accurate.”

AHO works closely with Alliance for Youth, which includes 22 community partners that help provide young people essential resources. They have a dentist and medical professionals who work pro bono, and an organization called Young Men’s Ultimate Weekend and Solutions that organizes rites of passage and other events. AHO also provides alternative medical care, such as acupuncture.

The organization also has developed strong ties with the Marin Education Fund and the College of Marin Foundation, which provide college scholarships, and Image for Success, which gives young people a complete, two-week wardrobe.

AHO’s staff is composed mostly of formerly homeless youth. Molly Kron, the program adviser, ran away from her home in Denver at 14 and spent a lot of time on the street. Through an organization in Denver similar to AHO, Kron eventually reconnected with her family, got a scholarship and graduated from San Rafael’s Dominican University.

“Molly has been helping us in a variety of ways,” said Babitzke, “to reach out and galvanize the community around the growing trend of youth homelessness.”

Babitzke said another staff member who has been instrumental to her organization is James Hayes, AHO’s youth outreach adviser. “Jimmy never knew his parents,” she said. “He was abandoned as a child. He is very much a leader (who has been) able to engage his peers and others into the mission of Ambassadors of Hope.”

Babitzke rarely takes a day off from work. Over the past two and a half years, she and her dedicated team of volunteers have produced seven community forums on youth homelessness. In October, the documentary “Youth Homelessness: A Growing Trend,” produced by AHO and narrated by Peter Coyote with a score by Narada Michael Walden, will screen at the Mill Valley Film Festival.

Babitzke’s troubles began when her younger sister, a single mother of two, had brain surgery, which left her incapacitated. As her sister’s ward, Babitzke exhausted all of her financial resources and became homeless for three years in Marin County. At age 53, she was staying with friends, not knowing from one week to the next where she’d be living, she said.

Getting her life back on track and helping her sister and her niece and nephew make a full recovery motivated her to get a master’s degree in social work from San Francisco State University. The experience also inspired her to start Ambassadors of Hope and Opportunity.

“We see this as a national crisis, and we’ve been trying to bring the issue of youth homelessness to politicians to have it included on their agendas,” said Babitzke.

“Youth are our future,” she added, “and with the growing number of youth who are homeless and without support, that affects all of us.”

For more information on Ambassadors of Hope and Opportunity, visit www.ahoproject.org. Each week, The Chronicle features a Bay Area resident who has won a Jefferson Award for making a difference in his or her community. The awards are administered by the American Institute for Public Service, a national foundation that honors community service. Bay Area residents profiled in The Chronicle are also featured on CBS 5-TV and KCBS-AM, which are Jefferson Award media partners, along with The Chronicle.