“AHO has had a huge impact on my life.” 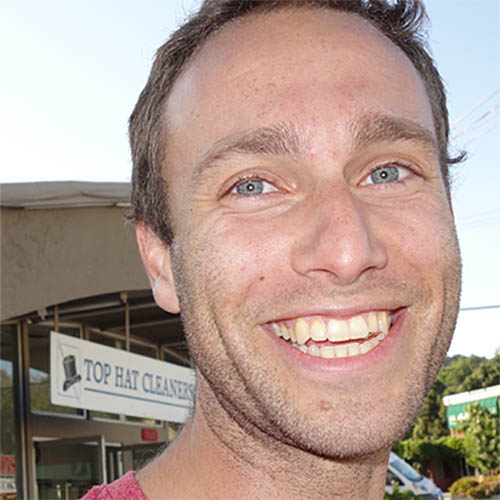 “Calling AHO for help is something I will forever remember. It did more to and for me on my path of healing and reaching my dreams because at AHO, I was treated like an intelligent, capable young man with many gifts to share with the world.”

I was introduced to AHO in May of 2017, through College of Marin. I had contacted the College about dormitory living or a resource for housing. I have for years wanted to attend a college and get a degree, but I was homeless for 10 years so going to college was out of reach. I’ve enrolled in school before, but with all the issues I was dealing with from my early childhood and being homeless, I could not follow through. I was working against myself without realizing it.

My parents divorced when I was around 7. I have a younger brother, who was alongside me on the roller coaster of trauma we experienced following our parent’s divorce. The courts split us apart, mandating that my brother live with my Mom, and me with my Dad, who struggled with mental illness and other health issues. His own issues were too consuming and I could not count on him for guidance and support as a parent. My relationship with my Mom became distant, and I was left to myself to be the protector for my brother. Feeling alone, overwhelmed and lost, I sought to escape, but I couldn’t identify at the time, what I was escaping from. I was too young, and without parental support and guidance, I was far from understanding what my future was about to become. The societal norm of getting a job, going to college, building a community of support, having a safe healthy foundation with stable housing was too scary, and beyond my capacity to even think about.

After becoming “an adult” at age 18, I fell into a cycle of homelessness, shelters, detoxes, jail, hospitals, and rehabs. When I would introduce myself as an alcoholic at AA meetings, I found some identity and community which was really what I was looking for. Although I’m grateful for those meetings and the people in them, I have since learned that I’m not an alcoholic and am beginning to understand how my early years impacted the decisions I made which led to homelessness.

When my Dad passed away in November 2015, I was the one that found him and putting the pain I felt into words is difficult. Even today, I can barely find the words to describe how angry I was that he left me alone again. Everything was falling apart in my life, and I felt like I was dying.
Then in September of 2016 everything came to a head; I was arrested, my Dad’s house was sold, and I was going to trial on a charge I did not commit. I fought for proper representation, and never got it. I struggled and blamed myself for my lack of knowledge in law and courtroom manners. Then God stepped into my life and surrounded me with some good men who helped educate me on my rights and the discovery process. The district attorney’s office gave me a deal to accept, however the bodily injury charge they wanted me to plead guilty to, I never did. I plead no contest to battery, given time served and released on five years’ probation….all for something I didn’t do.

When I was released from prison on February 17, 2017, with only shorts a paper bag and socks in the rain and no home to go to my Mom, who I was beginning to get know while in jail, let me stay with her. March 5, 2017 my brother’s daughter was born. Her birth felt like a symbol of hope for me, and that I had another chance at
life. However, with the lingering post-traumatic stress issues from my old lifestyle, every decision I had to make was overwhelming. I needed direction and support to meet the conditions of my probation, which I tried to get, but they were not available to me. Eventually I found a sober living environment
in San Rafael and found employment in a week. Things were looking up, but the manager of the house where I was living required a curfew and meetings that conflicted with my work hours. Again, my living situation was being jeopardized, and I was on the fence of losing everything and becoming homeless.

That’s when, something gave me the strength (I believe it was God) to reach out for my dreams. I contacted College of Marin, and they put me in touch with Zara and AHO. Within about an hour I was able to meet Zara at a cafe in San Rafael. Zara had immediate housing for me that I am so happy about and still living in. My mind and thoughts are fresh and hopeful. Calling AHO for help is something I will forever remember. It did more to and for me on my path of healing and reaching my dreams because at AHO, I was treated like an intelligent, capable young man with many gifts to share with the world.

AHO has had a huge impact on my life because I’ve never experienced support for help as comprehensive, immediate and caring from any government program or organization before. I can say that from my experience of ten years dealing with government programs that failed me. In other programs, I was a number on a waitlist. And, anyone who has been homeless before or can understand that many things good, bad, and indifferent happen while waiting. Having stable housing was a need I had that AHO met immediately. But, housing was only the beginning. Without AHO’s ongoing emotional and other support, I could not truly sustain the housing. AHO’s personalized safety net has included leadership opportunities like becoming a member of the planning team for the Town Hall Forum to educate the community about the growing trend of youth homelessness in Marin. AHO has also connected me with an amazing financial guide (a resource I requested) who is helping me get back on my feet financially after my years of homelessness. A trauma specialist that is helping me understand what happened to me and heal my past.

I am so grateful to Zara and AHO for helping me find my physical home with a community of peers who understand what I’ve gone through with the ongoing support to keep going forward toward my goals. As a future communications major, I feel blessed that AHO has given me a voice and the opportunity to share my story to provide hope for other youth like myself to not give up.